The New Zealand Barbarians Area Schools, in their third year under the Barbarians’ club banner, gave a resolute display before falling 43-7 to a slick Waikato Harlequins Under 18s in their annual fixture on August 29.

Played at Fred Jones Park, home of the Hamilton Old Boys club, right next to Waikato Stadium, the Area Schools started strongly with some solid carries and go-forward.

The team showed spirit in attempting to break down the Harlequins’ defence but the latterwere again a slick operation, capitalising on Barbarians mistakes and taking the lead after 15minutes. The score was 17-0 at the halftime break.

The second half saw the Harlequins step up another notch, but the Area Schools tried to hold firm. Midway through the second half, centre Roera Hartley, determined with ball in hand and with strong leg drive, carried the ball over the tryline for the first and only try for the Area Schools, converted by second five Jayden Tegg.

The squad had a hitout two days beforehand against a strong Hamilton Boys’ High School XV after Thames Valley Under 18s were a late withdrawal from a planned practice match. The clash was an invaluable exercise and the boys were exposed to some high quality schools footy. 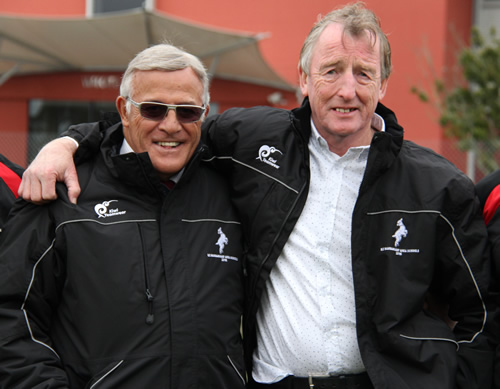 Barbarians President Bryan ‘Beegee’ Williams presented the team with their scarlet Barbarians jerseys prior to the big game on Saturday.

Captain of the 2015 NZ Barbarians Area Schools was Fabyan Kahaki from East Coast’s Ngata Memorial College, and vice-captain was Manaia Nyman, also of the East Coast, from Te Whanau Apanui.

*The Area Schools are chosen from the top players in some of the smaller, often rural areas of New Zealand, who do not get the chance to play in the top, higher profile First XV competitions.

This side was chosen out of a national July tournament in Whanganui, won by Central Area Schools. It was fitting, therefore, that there were 10 players chosen out of the central region, including no less than five from the East Coast. There were plenty of hidden gems in this group. Ones to watch were hooker Raniera Whakataka, wing James Williams, who has already been to a Chiefs Under 18 camp, halfback Jordan Wallden, who has represented Counties Manukau at age grade level, utility back Rayven Son Betham Ngapo, and speedy wing ‘Bruno’ Vitata, who is of Papua New Guinea background.

Centre and tryscorer Roera Hartley on the charge for the

Six were returning from the 2014 side, keen to reverse the 68-0 drubbing at the hands of a slick Harlequins. But the Area Schools did win the fixture 12-6 in 2013, their first win in several seasons. They had just five days together, so the challenge was, as ever, gelling them swiftly.

The Barbarians club sponsor the team, having succeeded the NZ Rugby Foundation in 2013.

The full squad was: