Some good, old-fashioned, tenacious defence and a strong desire to score their first big victory since 2007 drove the New Zealand Barbarians Area Schools to a 12-6 victory over the Harlequins in Hamilton on August 23, 2013.

The Barbarians club has just begun what will hopefully be a long association with this important and unheralded national rugby side, encapsulating the best players from the 42 area schools from Taipa in the far north to the Catlins in the deep south.

The team had an intensive week in Hamilton which focused on teamwork, bonding, skills, game plan and which culminated in the marquee match-up with the Harlequins, effectively a Waikato Under 17 team.

With just four trainings under their belt, the boys had to gel swiftly and on a wet night in Paeroa put six tries on Thames Valley Under 18s in a solid hitout. Second five and captain Allan Heighway (one of just three players who had previously represented this team) scored a double and the most pleasing aspect was that the side was able to action in the match what it had accomplished at training. There were, naturally, plenty of work-ons and some ironing out of kinks for the much anticipated Friday night match. The only bum note was that lock Jamie Finnerty was taken to hospital in Thames with a dislocated shoulder.

The boys were able to regroup and got through the Friday match with just 21 players.

Manager Mike Smith, a former North Auckland and Thames Valley tighthead prop, says the boys felt honoured to receive their match jerseys on the Friday afternoon from Barbarian and former All Black Matthew Cooper, before he headed for his TV commentary duties. Cooper spread the right messages about focusing on the team before the individual.

In previous seasons the Harlequins have put out very strong units, which amounted to Waikato Under 18 combinations, and invariably were too strong for the Area Schools, but on this occasion it was closer to an Under 17 combination.

“We also got them first-up. In previous years we’ve played them when they were having their fifth game. So we were starting on the same page,” says Smith.

There was a good core of support from the boys’ families and friends, some of whom had travelled long distances to cheer the boys on.

On a good surface, though slightly wet underfoot, the NZ Barbarians Area Schools had to put in some heavy work at the set-piece and on defence to stem the Harlequins’ advance. They led 5-3 at the break thanks to an opportunist try to second five Heighway, who pounced on an error and kicked ahead for a score from 45m out. The loose forward trio of Richard Nikolaison (No 8), Jacob Vincent (7) and Sahn Povey (6) was outstanding, and the leadership of Heighway was to the fore as the game wound down. The set-piece was gaining ascendancy and the final try went to Japanese-born loosehead prop Masashi Sumino, of Mercury Bay Area School, who crashed over near the uprights.

The victory, the team’s first in a big fixture for six years, meant plenty to these boys, many of whom lapped up the good coaching and chance to shine on the national stage.

“The boys were really stoked. A couple had tears in their eyes. They bonded really well. This was a big arena, big stadium, big stage for them,” says Smith.

Some players were noticed by bigger rugby schools and who knows where this game may take them in their careers.

The Barbarians look forward to continuing association with this well-organised and well-performed team. Senior Barbarians Mike Mills (president), Mark Moore (club captain) and Ron Williams (committee member) were on hand and were most impressed with the effort and talent in this side.

The full squad was: 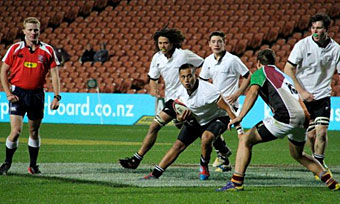 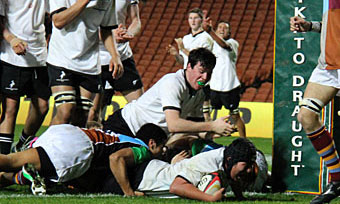 Prop Masashi Sumino scores the match-sealing try near the posts, to the obvious delight of lock Keeghan Grey. 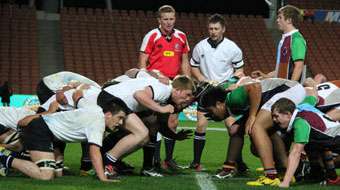 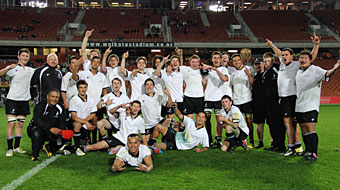 The NZ Barbarians Area Schools celebrate their victory in Hamilton.