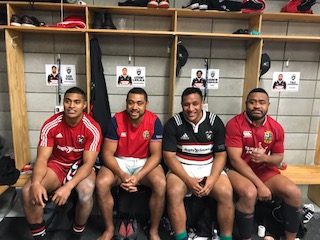 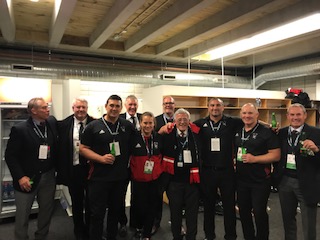 Before the largest rugby crowd seen in Whangarei since Rugby World Cup 2011, the NZ Barbarians won a host of admirers far and wide with a gritty display to open the 2017 Lions’ tour of New Zealand.

Sporting a new jersey, which was not dissimilar to the old Counties strip, so as not to clash with the Lions’ usual scarlet strip, and their provincial socks, the Barbarians took the game to the Lions, throwing everything they had, including a bench full of impact.

There had been several changes to the squad due to injury and Super Rugby call-ups since the original April announcement, and then Junior Ngaluafe was a late defection, replaced by All Blacks Sevens flyer Joe Webber.

The Barbarians seized the initiative from Bryn Gatland’s kickoff, and held it for most of the first stanza. Gatland, who was mightily impressive up against his father’s side, mixed up his kicking game with a nice array of grubbers and chips. Indeed, the Lions, who had flown into the country only some 85 hours beforehand, did not get out of their half for nearly 10 minutes as the well-organised Barbarians’ defence held firm.

While Johnny Sexton opened the scoring with a penalty goal for the Lions, the Barbarians were tantalisingly close when Luteru Laulala’s break saw him feed Kaveinga Finau, who was held up over the line in a trysaving tackle by the industrious Taulupe Faletau. The latter, along with the penetrative Ben Te’o and ubiquitous Ross Moriarty, were the best of the tourists.

Not to be denied, the Barbarians maintained pressure and captain Sam Anderson-Heather of Otago plunged over after an attacking bomb. At 7-3 it was game on. That was the score at oranges.

The likes of local boy Matt Matich and hooker Andrew Makalio offered maximum impact off the pine. Matich carried with vigour and Makalio tackled with sting. Peter Rowe, the sole Barbarians member in the playing squad, entered the fray after 60 minutes for one of the final games in a long and decorated career.

The Lions’ line speed, which was to become a feature of their tour, started to force errors from the committed but tiring Barbarians, and wing Anthony Watson crossed for their opening try out wide after concerted pressure.

The Lions hung on in the face of fierce resistance, replacement prop Mako Vunipola winning a vital turnover late in the action.

The final scoreline of 13-7 represented some effort for a squad of mostly amateur players, many of whom took leave from jobs to take on this most famous of touring teams and almost gain parity.

Anderson-Heather was slightly disappointed his men could not quite push onto claim a famous victory, but was justifiably proud of how they conducted themselves.

“It was close but not close enough, but the boys will take a lot of pride and respect out of that. We looked at it as throwing as many punches as we could,” said the captain.

Coach Clayton McMillan, who will again coach Bay of Plenty in the Mitre 10 Cup, could not fault his troops.

“I’m incredibly proud of our lads for fronting up and staying true to the game that we’ve always said we were going to play,” he said.“We tried to keep things pretty simple.I’m incredibly proud of the scramble defence, that really dogged determination not to let them score points that was probably the defining thing. We wanted to stay in the fight the whole game.”

They certainly did that, and won a heap of respect for themselves and the Barbarians club.