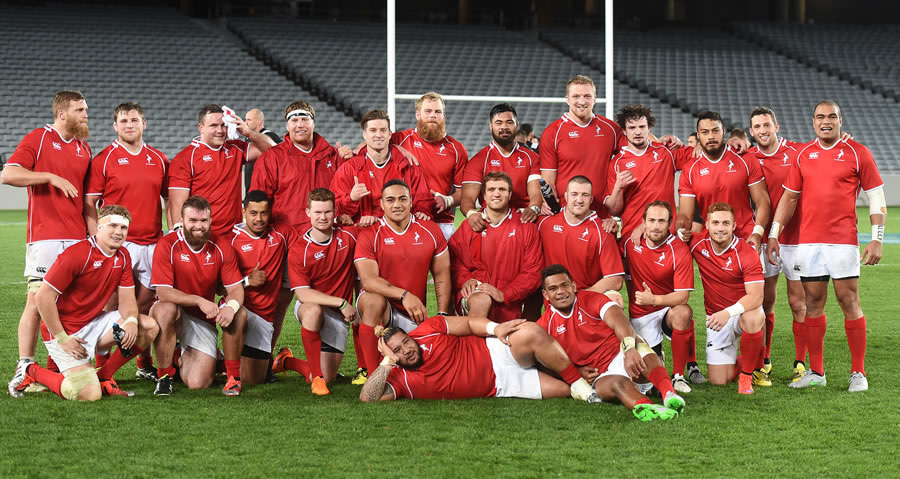 By Campbell Burnes at Eden Park

In their first big outing in five years, the New Zealand Barbarians did themselves and their club proud with a tremendous allround effort to defeat the Maori All Blacks.

It was the Barbarians’ first win against the Maori in a match granted full first-class status and was founded on a physical approach at the breakdown and adherence to a simple game plan.

The only pity was that only just over 5000 turned up at the home of rugby to witness a display that will surely give the powers that be in New Zealand Rugby food for thought that this team deserves more prominent fixtures. That small crowd figure can be put down to the rain that swept Auckland on the day.

The Barbarians were back on Eden Park for the first time since 1985, while it had been a good quarter of a century since the Maori had graced the ground.

Lock Joe Wheeler was shifted, five days out, from the Barbarians squad to the Maori to bolster an injury-hit group. The Barbarians’ preparation was relaxed but clear-headed, and the side visited the clubrooms on the Tuesday night to soak up the history and ambiance of the club.

Perhaps spurred on by the challenge of the Maori haka, which they accepted as a tight group, the Barbarians made a rousing start, controlling no less than 95 percent of the field position in the opening 30 minutes. That they led just 15-3 can be attributed to some staunch Maori defence.

Blake Gibson, who again showed his quality and potential as a loose forward, crossed the line off a lineout drive, but was held up. Then followed skipper Brad Shields, who lost the ball in the tackle, and Ofa Tu’ungafasi, who ran into Shields. The Barbarians pack had the bit between their collective teeth and were controlling the tempo.

Luke Whitelock, seven days after a run for the World XV in Cape Town, had one of his better games, as did Andrew Horrell, another World XVer, from fullback. Alex Ainley, as he had done for the Highlanders, got through a power of work and won his lineout ball.

The pressure had to tell, and it did at 24 minutes when Gibson speared over in the face of some passive defence off a quick tap by Mitch Drummond. The halfback was over four minutes later, darting in from close range. At 15-3, the Baabaas were in control, playing smart, uncluttered footy, not trying to be too expansive in the slippery conditions, but keeping it in hand when required. The Crusaders halves Drummond and Tom Taylor, who had not started at No 10 since the 2014 ITM Cup, dictated.

As expected, the Maori gave a response in the third quarter, securing more ball and playing with more urgency. Damian McKenzie, who had a mixed night, scored off a nice, long pass by his brother Marty. Seta Tamanivalu had come out of the line for the intercept but he made up for it with a sizzling 40m solo try, evoking memories of his stellar 2014 ITM Cup with Taranaki. The game was effectively sealed at 27-10 after Patrick Osborne scored out wide off some very good lead-up work by the Barbarians. A Codey Rei try may have lifted Maori hopes, but the Barbarians finished with a wet sail, Ben Tameifuna nearly crossing in the corner and then Richard Buckman uncorking a brilliant offload for Taylor to put the exclamation point on a tremendous display from 1-23. That score had come from a seldom seen wall tap move.

The sole dampener for the Barbarians was an ankle injury sustained by Cory Jane, who was looking good to that point. Thankfully, it was not too serious.

In general, the Barbarians showed far more cohesion than the Maori. They controlled the tempo, the ball and the field position and never overplayed their hand.

With less than five days’ preparation, the coaching staff of Scott McLeod, Paul Feeney and Craig Philpott pulled all the right strings and struck that fine balance between relaxation and focus with this talented group, several of whom were on the cusp of All Blacks’ selection.