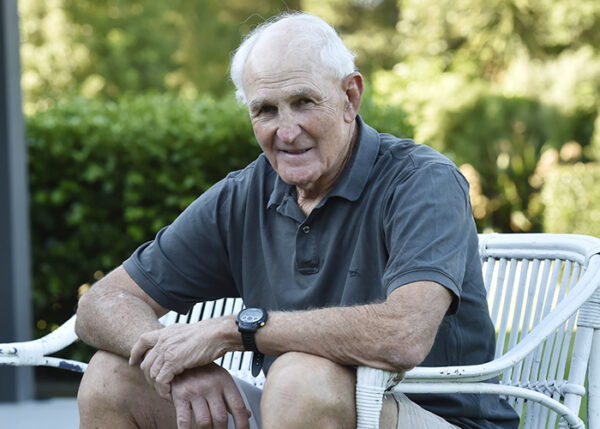 Everyone knows of Ian Kirkpatrick.

But not that many realise he is the current patron of New Zealand Rugby. Not many also realise he was made a Barbarian when he was just 27, one of the youngest members in the club’s history. At the time, in 1974, he was the captain of the All Blacks.

One of the finest men in black during his 1967-77 career, in which he scored 50 tries in 113 appearances, and a then All Blacks record 16 tries in 39 tests, the man they call Kirky is still held in the highest regard in rugby circles.

He is, along with his old provincial teammate Grant Allen, one of two Baabaas residing in Poverty Bay. At 74, he has retired, but keeps fit playing golf, walking and cycling and lives about 5km out of Gisborne.

Last year, he was due in Auckland for the September Sacred Heart versus King’s First XV match for the Kirkpatrick-Fitzpatrick Cup. Covid scuppered that. No problems, he shot up to Te Araroa with another former All Black from the region, Andy Jefferd, to watch the East Coast club final.

But never fear, when Kirkpatrick is at home during the winter, you’ll find him at Patutahi Domain watching his beloved club Ngatapa or at Rugby Park watching Poverty Bay. He soaks up plenty of code on the box too in between seeing his eight grandchildren growing up.

Kirkpatrick played five first-class games (for five tries) for the NZ Barbarians from 1972-77. He always loved his time in the famous scarlet jersey. The first occasion was in 1972 when he scored a try on Eden Park in a 31-16 victory over Auckland in a Commonwealth Games benefit match. His teammates that day included Wallabies Russell Fairfax and John Hipwell, Springboks Piet Greyling and Jan Ellis, and one Wilson Whineray in his final first-class appearance. There was a 1973 Baabaas tour of Fiji to savour too.

“It was an honour to play for the Baabaas. They were big games too, often in front of a big crowd on Sundays after club rugby (on Saturdays),” says Kirkpatrick.

“There was no ‘knock your head off’ stuff in those days. We wanted to run the ball.”

He enjoyed the conviviality at ‘The House that Jack Built’ through the 1970s and has made the pilgrimage to the new clubhouse on several occasions in the last decade.

“Since the pro era, the Baabaas have found it difficult to operate like they did in the past, so you have to give them credit for hanging in there and continuing to foster the game at the grassroots level,” says Kirkpatrick.