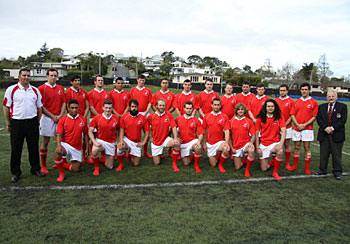 Two Barbarians cups were presented last weekend – the first to the national schools winner (Hamilton BHS) and the second the following day to the Auckland Under 85kg rep side, whose 3-1 tournament record was enough to clinch the silverware after dropping its opening match 8-3 to eventual runners-up North Harbour.

Tournament organiser Deano Allnutt says the 2013 tournament was very successful with a lot of young players shining, though the age spread was 18 to 53. Gary Good from the Waikato Cavaliers was the oldest (53) but youngest at heart. He received a special award for services to U85kg rugby – a true legend and a great ambassador to the fast and furious grade.

The tournament was a great spectacle for all the supporters and the games were play at pace, as befitting middleweight rugby. Organisers Allnutt and Cliff Lyon were assisted by Scott Lacey, while Roger ‘Mad Dog’ Moore was also on hand. Doctor Tom Marks of the Waikato Cavaliers did a top job stitching up the walking wounded.

There are plans afoot to have the next tournament in the Taupo region, which will make it easier for the Wellington Centurions team to meet halfway.

A tournament team of 22 was selected and they were photographed in full Barbarians strip (as pictured).