It was a whirlwind 48 hours for the 2013 NZ Barbarians Schools.

In their second year of existence, this top schoolboy side remained unbeaten with a solid 37-19 victory over a strong Auckland Schools Under 18 selection at the famous ‘Birdcage’, home of St Peter’s College.

It appeared that the rugby fates were conspiring against coaches Dave Dillon and Darren Larsen as they prepared their charges at the Millennium Institute on the North Shore on the Friday-Sunday of Labour Weekend.

They had already dealt with the relatively late withdrawal of one player, and then had to cope with three injuries – to Lindisfarne College loosie Hugh Renton, Southland BHS halfback Liam Howley and Naenae College outside back Fereti Soloa. Two were called in – Te Toiroa Tahuriorangi of Rotorua BHS and Jordan Jackett of Sacred Heart College.

There was time for just one full training session on the Friday and a heap of information to be processed before the Saturday afternoon match. Bryan Williams presented the jerseys to the team.

Played in superbly fine conditions before a decent crowd that included several Barbarians, Tana Umaga among them, the NZ Barbarians Schools looked to use plenty of width and scored some fine tries. Fullback Jordan Trainor, on his home turf, had a field day, racking up 22 points via his boot and a try. Man of the match was openside flanker Mungo Mason of Tauranga Boys’ College, but there were sterling performances by hooker Seko Pole of Otago BHS, who was unlucky to miss full NZ Schools selection, and wing Fletcher Matthews of Waimea College. The side was well led by No 6 James Blackwell of Wellington College, who has enjoyed a tremendous season for his First XV, much of it captured by the TV cameras. Five-eighths Daniel Hollinshead of Tauranga Boys’ College was the vice-captain. An interesting player was lock Fin Hoeata, brother of former All Black Jarrad Hoeata. He was the only player chosen from Dilworth College, winner of Auckland’s 1B competition. The game lost some shape in the middle stages and the set-piece spluttered near the end when changes were made, but overall it was a pleasing display.
Though time constraints meant the squad never got to check out the Barbarians clubrooms at Eden Park, they did soak up plenty of rugby knowledge at an All Blacks training session the next day. Aaron Cruden and Sam Cane took part in a Q and A with the boys.

“They were awesome with the boys as two of the younger members of the All Blacks, and they were where these guys were just a few years ago,” says Dillon.

Then followed a 90 minute skills session with All Blacks assistant Mick Byrne, focusing on passing, running lines and tackle technique. The boys took plenty out of that before watching the All Blacks train before they flew out for Japan.

There looks to be a fuller programme for this team, which plays in the Barbarian scarlet, for 2014. A quadrangular with NZ Schools, Australian Schools and Fijian Schools is in the offing for September/October, to be hosted by the Hurricanes region. Dillon hopes to be involved again, though he is stepping down as First XV coach at Sacred Heart College to take up a player development role at the Chiefs. Dillon was assistant to Mark Vincent with this Barbarians side last year, where it made such a fine impression. Larsen has coached Hurricanes Schools and is involved with Wellington’s Petone club. 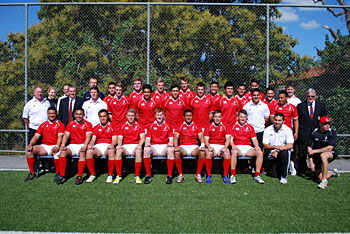 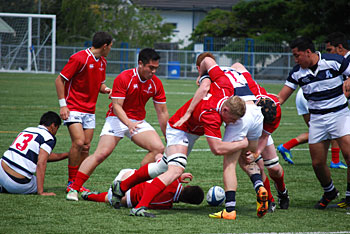 Lock Jack Sherratt and captain/loose forward James Blackwell clean out, flanker Mungo Mason is on the ground with No 8 Tallis Karaitiana ready to pick, while halfback Lisati Milo-Harris awaits developments