We are pleased to advise that the following events have been organised and you should note the dates in your diary:

All clubs have indicated that they have had a good response from members and are looking forward to enjoying an evening with Baabaa members in our clubrooms.
Pakuranga, in particular, has indicated that it will have 20 to 25 members attend. It will be a good occasion to recognise Pakuranga and its outstanding success this year.
Each club night will commence from 5.30pm.

The first ITM Cup game to be played at Eden Park this year will be between Auckland and North Harbour, the ‘Battle of the Bridge.
Sunday August 18 is the date and day to come to Eden Park to see these teams battle it out in the first round of our national provincial championship.

As part of our support for secondary schools rugby, the NZ Barbarians agreed to support NZ Area Schools rugby when the NZ Rugby Foundation sponsorship ended. The NZ Rugby Foundation provided great support for many years but acknowledged that its main responsibility was towards the support and rehabilitation of injured players. We have been pleased to pick up where the Rugby Foundation left off and our involvement has been much appreciated in supporting a large group of rugby players that don’t get the exposure or the opportunity that schools in the main or larger centres in New Zealand provide.

The game against the Harlequins will be played in Hamilton on Friday August 23 as a curtainraiser to the Otago v Waikato ITM Cup game, which is also a Ranfurly Shield challenge.

The NZ Rugby Foundation luncheon is one of the main events the foundation holds to raise funds to support injured rugby players.

The NZ Barbarians are pleased to support the foundation and all the valuable work it does, year in and year out. We hope you will support this worthwhile fundraising event.

The details are as follows:
When: Friday September 13 from 12.00pm
Where: Eden Park Function Centre – South Stand
For full details, phone: 09-304-0355 or email: info@experiencegroup.co.nz

We have now added a links page to our website (beneath the news and photos menu) that will give you a one click connection to many sites that rugby followers will be interested in – including a link to our major sponsor – Barfoot & Thompson Ltd.

The Barbarians welcomed 10 of their new members (out of a bumper total of well over 20) on an historic night at the clubrooms on Wednesday July 24. 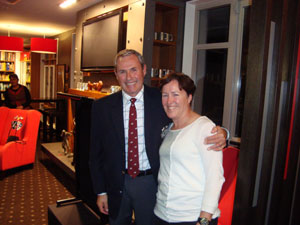 They are, as follows:

Anna Richards, Melodie Robinson and Dr Farah Palmer (who was not able to attend) are the first ladies to be inducted as Barbarians in the 76-year history of the club. The club welcomes this trio, who have a total of nine Rugby World Cup titles to their credit with the Black Ferns.

It was a most convivial evening with the new members and some of their families. The full list of new members for 2013 will be listed in our August newsletter.