A very successful 2013 AGM was held in the clubrooms on Wednesday November 27.

Some of the highlights of the meeting included the following:

The Christmas function will be held in the Clubrooms on Friday December 6 from 6.00pm.

This is a special night, as not only is it our Christmas function, it is an opportunity to include members’ wives and very importantly, wives of members who have died.

While we have a list of the names of widows of members who have died, it is not complete so, if you have contact with members’ widows, please invite them to attend and let us have their contact details to add to our ‘contacts’ list.

Dean Paddy and his team have gone to a lot of trouble to prepare for the Christmas night and amongst other things, have arranged a ‘wine tasting’. Also, if you have a guitar, bring it along and start up a ‘sing-along’.

The clubrooms will be closed over the Christmas period. The December 6 (Christmas function night) will be the last club night for 2013.

We will let you know when the opening night for 2014 will be confirmed. It is likely to be at the end of January.

To cover costs, we must sell all 32 club box tickets for non-rugby events. Members will be given the first option to buy tickets.

Baabaas and the SAS 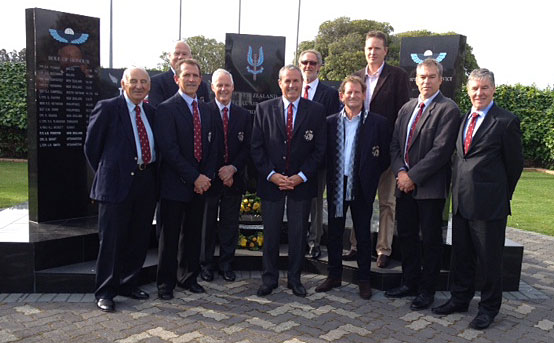 This photo was taken at the SAS base in Papakura and features nine Barbarians, including President Mike Mills (centre).
Via Barbarian Malcolm Hood, a contingent of SAS conference delegates attended the clubrooms on September 4 for the Auckland v Counties Manukau ITM Cup game. They enjoyed the experience so much that an invitation for a reciprocal visit by the Barbarians management committee was extended by Lt. Col. Karl Cummins.

Last month some of the committee took up that offer and were royally treated to a tour of the base, an in-depth presentation of the history and achievements of the NZ SAS and a very enjoyable social hour followed by a meal. It was an amazing night with an impressive group of people.