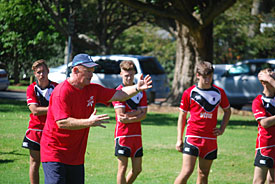 By Terry Horne
Grammar TEC Rugby Club at Cornwall Park was the generous host for the New Zealand Barbarians Rugby Club’s 2015 interactive coaching clinic.
Over 250 participants and spectators from the provinces of Bay of Plenty, Waikato, Counties Manukau, North Harbour, Northland and Auckland were in attendance on a very hot and dry day, for what was to be an extremely successful, relevant and sought-after professional coaching clinic.
The coaches in attendance came from the premier and reserve grade competitions with a few interspersed from the Under 21 grade and secondary school First XVs.
First XV players from Howick and Rosmini colleges provided the players for the coaching and instructive sessions.
The guest coaching panel included Barbarians Sir Graham Henry, Paul Feeney and Japan- based Scott Pierce, along with All Blacks scrum coach Mike Cron, and North Harbour ITM Cup coach Steve Jackson.
There was a distinctive and abundant support from the Barbarian club members and its committee who provided support not only in the organisation but also with the barbeque and associated entertainment.
The Barbarian club captain Mark Moore welcomed all the visitors and set the tone for the full day. His contribution was enhanced by the conclusion ceremony and question and answer session controlled by President Bryan Williams, while under the questioning eye of MC Melodie Robinson.
The theme of the clinic was Interactivity, not only with the ‘miked up’ guest coaches but also amongst participating coaches. The relationship between ‘Efficiency of Movement’ and ‘Injury Prevention’ was also stressed.
Thanks need to be expressed to the coaching panel, especially the second of the keynote presenters, Mike Cron, who flew up from Christchurch for the clinic.
A special thanks to Paul Feeney and our Italian connection Melita Martorana who formed the base of the organising, as well as to Roger and Mark Moore who really made things happen on the day.
Thanks to Brandon Jackson, Darryl Menzies and the team from Grammar TEC and finally a big thanks to Dylan Mika whose company generously donated 400 bottles of ‘Samoa’ spring water.