The Barbarians club should be suitably impressed at the top quality of rugby during this important weekend which it sponsors.
Played on two match days – Friday September 5 and Sunday September 7 – at the usual venue of Rotorua Boys’ High, there were a good number of spectators, and club members, watching some open play under sunny skies and warmish, yet windy conditions.

In the decider, Scots College and the defending champion Hamilton Boys’ High produced a thriller, culminating in a 26-all draw, the title thus shared for the fourth time since 1982.

There was drama aplenty going back to the first big televised match, the semifinal between Auckland 1A champion, Auckland Grammar, and the first-time Wellington champion, Scots College. The Moascar Cup, in Auckland Grammar’s possession, was also up for grabs.

Scots centre Malo Tuitama had made a flying visit back from Samoa and a family bereavement but you would not have known as he registered a double with some elusive and speedy running. Inside him, the dangerous Thomas Umaga-Jensen was always on the lookout for an offload, running with the ball in one hand like some stockier Sonny Bill Williams. But it was Auckland Grammar tighthead prop Callum Otway who drove through the middle of a ruck, formed from a lineout, to score the game’s opening try.

Tuitama could not be kept out of the game. His first try came from a turnover won by his openside Michael Findlay, and he swivelled and dived over for the five-pointer. Soon afterwards, lock Henry Mexted, son of Alan and nephew of new Barbarian Murray, scored off an astonishing 35m Scots lineout drive.

Auckland Grammar, bowed but not yet broken, had the final say of the first spell via fullback Shaun Stevenson, who scored a fine solo try off a grubber and chase.

Scots turned with an 18-17 lead and a free licence to press ‘go’ on their high octane rugby.

First five TJ Va’a stepped off his left foot from a scrum, leaving his marker Wiseguy Faiane clutching at air. Auckland Grammar’s riposte, courtesy of outstanding lock Sam Ulufonua, was swift. He pilfered a Scots lineout and beat four before plunging over. They had pegged the margin back to 22-25. But Scots were about to deliver two knockout blows. The first came off a long build-up and good pass by Peter Umaga-Jensen, twin of Thomas. Tuitama was on the end for his second score. Big prop Alex Fidow, a man with skills to match his size, finished off another burst by Thomas Umaga-Jensen. Fidow then buried Auckland Grammar hooker Brook Wilson in a tackle that summed up Scots’ dominance of the second spell. Auckland Grammar centre Rieko Ioane, apparently a 2016 Blues signing, crossed but his try was ruled out as time ran down. The favourites had missed 24 tackles. That was the tale of the match, that and the brilliant back play of Scots, led by Va’a with a try and six from seven off the tee. So happy was the skipper that he had forgotten his side had just annexed the Moascar Cup, 39-22, for the first time in their history!
If the crowd thought that was dramatic, they barely had time to catch their breath before the second Top 4 semifinal was upon them, three-time champion Hamilton Boys’ High against South Island champion Christchurch Boys’ High, one of the great rugby schools.

The defending champion prevailed 20-19, but only just doing enough to repel a fast-finishing Christchurch BHS.

Hamilton’s right wing Sam Toia scored first, putting the exclamation point on a beautifully constructed try. The Chiefs regional champion was good for its 8-0 halftime lead, even though the likes of blindside flanker Jacob Vincent was industrious and No 12 Alex Nankivell penetrative for Christchurch.

But when Hamilton halfback Nick McCurran zipped off from an 8-9 scrum move and lock Viliami Tuipulotu scored from a pass one off a ruck, Hamilton had a 20-7 advantage. Christchurch had sent No 14 Fraser Scott between the uprights, but appeared to be gone. However, they rallied courageously, hooker Jim Smith bulldogging over with perfect body position and left wing Cameron Hay nailing an opportunist try to haul the margin back to one. But time ran out.

Player of the match went to Hamilton’s ubiquitous No 7 Jahrome Brown.

There were two other thrillers, if that were possible, in the co-ed semifinals. Halfback Tom Stewart landed a last minute penalty goal to seal Feilding High’s path to the final, 14-13 over Auckland co-ed champion Otahuhu, who scored two tries to one.
Cambridge High had a 15-14 narrow squeak over St Kevin’s of Oamaru. 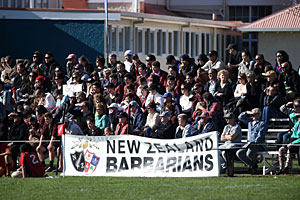 The Barbarians’ banner was front and centre
during the Top 4 weekend in Rotorua.
Photo: www.photosport.co.nz

Feilding High made no race of the co-ed final, played as curtainraiser to the Top 4 final. They ended Cambridge High’s winning streak at 14 with a clinical 43-10 victory, thus claiming the Barbarians Trophy, presented by club president Bryan Williams.

They ran in six tries, many of them crackers, and none shone brighter than player of the match, right wing Luther Hirini. He scored two and set one up with a combination of speed, skill and rugby nous. The individual highlight, though, was a 100m effort from a chip and regather, finished in style by No 15 Vilimoni Koroi.

Cambridge competed gamely, but was over-run by swift, free-wheeling Feilding rugby. They did engage a 13-man lineout at one stage, and had the last laugh through centre Sonny Leonard, but Feilding were convincing and deserved victors.

So to the Top 4 final, with the Moascar up for grabs, not to mention the crown of national First XV champion.

The opening exchanges were as explosive as they were extraordinary. Scots roared to a 19-0 lead after 25 minutes, scoring thrice within just seven minutes with some irresistible attacking play and width, and had bombed at least two other tries!

Wing Connor Garden-Bachop, son of former All Black Stephen, made up for blowing one of those tries by crossing after some slick work by Fidow and Va’a. Before Hamilton could regroup, Tuitama had finished off a 50m movement started by a Thomas Umaga-Jensen bust and offload. The latter then laid on another for his twin, centre Peter.

Hamilton had every reason to look shellshocked, especially as some of the stats were in their favour. But they regained their confidence when centre Elijah Ale scored near the posts, executing a 2-3 cut with precision.

Soon into the second spell, Hamilton’s outstanding hooker, Solomone Tukuafe, scored the first of two tries off lineout drives. That sandwiched an intercept try, for his second, by Garden-Bachop.

When Jahrome Brown dotted down for a quite superb team try, Hamilton had hauled themselves off the canvas to be back on level terms at 26-all. Both teams, heavy with fatigue despite good fitness, then traded blows, but Scots’ option-taking was coming under scrutiny. Hamilton No 10 Orbyn Leger sprayed a drop goal just wide at 63 minutes, but his side finished slightly the stronger.

There was some confusion at fulltime, but there is no provision for extra time for schoolboy rugby, and so, for the first time since Hamilton BHS had drawn 6-6 with Auckland’s De La Salle in 2008, the Top 4 title was shared.

Thomas Umaga-Jensen, unsurprisingly, was voted player of the match, for his bustling surges and ability to offload.

Bryan Williams, in presenting the Barbarians Cup to the two skippers, addressed the crowd: “On behalf of the Barbarians, I just want to say what a great privilege it is to sponsor this tournament. I want to congratulate both teams on a magnificent performance, obviously a game of two halves, great structure versus great flair.”

That is a fair summation of one of the great games of schoolboys rugby and some of the most compelling play seen all weekend from test matches to ITM Cup.

Keeping a close eye on the rugby were a clutch of rugby men such as Barbarians Dave Rennie, Wayne Smith and Willie Los’e (in TV commentary), not to mention many scouts, agents and coaches from around the country.