A performance of great discipline and accuracy saw the New Zealand Barbarians Schools side record its second win in a row with a 70-6, 12-try demolition of Samoan Schools in Auckland last weekend.

Coaches Mark Vincent and Dave Dillon have clearly drilled their charges well and that was apparent from the moment TJ Faiane slipped a judicious grubber through for Bram Egli to pounce after just seven minutes. Then followed a steady procession of tries, 12 in all, as the Barbarians’ support play and line-breaking ability came to the fore against the smaller Samoans.

Damian McKenzie had a tough time off the tee, slotting just five from 12 in the blustery conditions, but again showed some nice touches in his general play. Mitchell Karpik and Dillon Wihongi were especially prominent in the pack, and Nelson Asofa-Solomona will be hard to stop when his body position gets lower.

Michael Green showed gas out wide to score two tries, and lock Jack Falloon, who won his share of lineout ball, also crossed for a double. Faiane, often working off a solid scrum or ruck platform, was elusive and scored the final try.

Dillon was happy that his players maintained discipline in the face of some dangerous play by the Samoan team. The visitors finished with 12 men on the field and were guilty of several high and late shots.

“We’re a pretty tight bunch from all over the country. We did some good activities arranged by the Barbarians during the week,” says Dillon.

“We are unique in being the first Under 18 schools Barbarians side. We wanted to live up to the ethos of the club, which is about enjoying the footy and I think we did that.”

Dillon added that his team was very motivated, despite having just six trainings before beating Australian Schools 24-5 on September 29.

Former All Black and Barbarians member Gary Cunningham presented the jerseys on the Friday night before the match. The Barbarians Schools concept was a real success and we look forward to this team returning in 2013. In the second game, New Zealand Schools were upset 16-14 by Australian Schools. 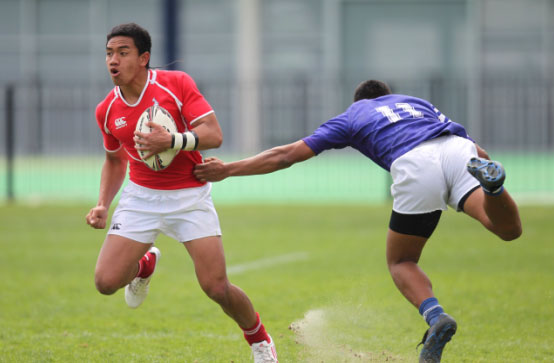