As ever, Rotorua BHS was the venue for another cracking national Top 4 First XV tournament in both the co-ed and boys’ divisions from September 4-6.
There was a good number of Barbarians from near and far on hand to lend support and see some of tomorrow’s stars today, as the SKY slogan goes.
And while a cloud hung over the Rotorua BHS victory, following eligibility questions relating to its Super 8 competition, there was no evidence of impropriety at the Top 4 weekend itself. Certainly on the field, Rotorua deserved its triumph and produced a marvellous final with Scots College of Wellington, the co-defending champion.
Following the tournament, 53 players were named to attend a New Zealand schools camp, from which 25 were chosen for the NZ Barbarians Schools squad. That team is listed at the bottom of this report. Again coached by Darren Larsen, the NZ Barbarians Schools were to play NZ Schools at Palmerston North BHS on September 19, looking to preserve an unbeaten three-year record since inception in 2012.

The Friday saw two contrasting, yet dramatic, boys’ Top 4 semifinals.
In the first, co-defending champs Scots College, after an emotional few weeks in which it had lost the Wellington final to St Pat’s Town, then turned the tables on Town in the Hurricanes decider, and seen a weakened side divested of the Moascar Cup just days earlier, engineered a startling comeback to beat the South Island champion Otago BHS 35-27.
Some good hustle and commitment from the Otago BHS pack rocked Scots in the opening stanza. No 8 Slade McDowall, who made NZ Schools, made a 50m dash from the base of a messy scrum to open the account, and added a second just 10 minutes later, this time much closer to the line but again off a scrum.
The dangerous Scots centre and skipper Peter Umaga-Jensen, nephew of Barbarian Tana Umaga, replied with a brilliant try, set up by bullocking prop Alex Fidow and his twin Thomas Umaga-Jensen.
Otago BHS prop Sione Asi wrestled his way over, but his Scots opposite Moala Katoa, set up by Peter Umaga-Jensen, crossed to even it up at 17-all at halftime.
The twins were at it again, setting up hooker Lotunu’u Haueia, before Asi added his second. Otago BHS led 27-25 before the inevitable late Scots flourish. Fidow made a barrelling charge, and a cutout pass to player of the match Thomas Umaga-Jensen sealed the encounter.
In the final analysis, the 41 missed tackles by Otago BHS were costly, though its pack was more than up for the challenge.
In the second semifinal, home team Rotorua BHS upset the Auckland 1A champion St Kentigern 7-5.
An already depleted St Kentigern backline lost both starting midfielders to injury before the 15-minute mark, and Rotorua’s physical approach took its toll. No 8 Kaydis Hona drive over with good body position from close range.
Facing a 7-0 halftime deficit, St Kentigern had to throw everything at its opponents, and there was hope when halfback Henry Saker scored from an 8-9 scrum move. But as the rain came down, Rotorua’s continuity game told. Player of the match went to fullback and captain Isaac Te Aute, who was busy and effective and made a trysaving tackle on St Kentigern prop Jerry Samania.
In the co-ed semis, Moascar Cup holder St Andrew’s College of Christchurch, partly thanks to a Layton Francis double, defeated Feilding High School 27-18, while Cambridge High School edged Blues co-ed champion Aorere of Auckland 18-16. 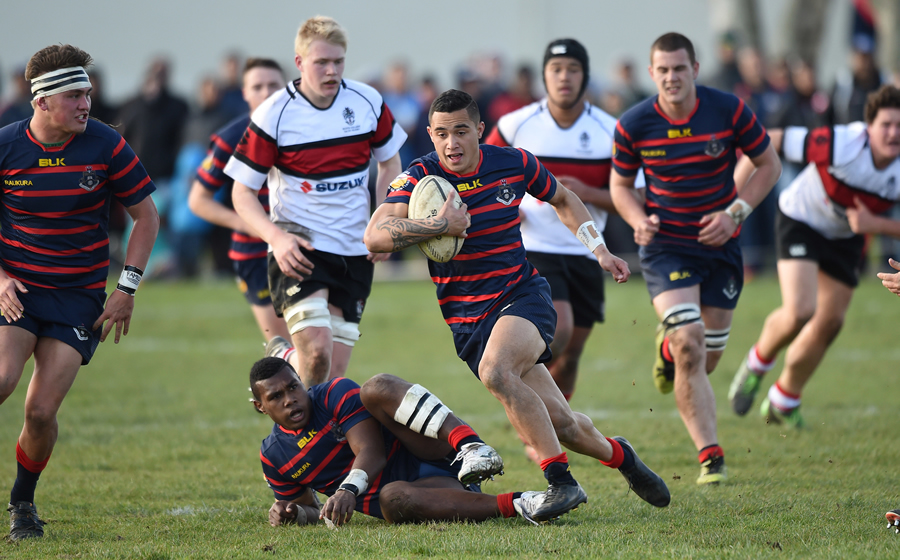 Rotorua BHS fullback Isaac Te Aute on the way to a
stunning solo try in the Top 4 final against Scots.
Photo: www.photosport.nz

So to Sunday, finals day.
Conditions were fine and St Andrew’s appeared relaxed ahead of the co-ed final, even though the Moascar was on the line.
“You only feel pressure when you don’t know what you’re doing,” said STAC captain and lock George Mirfin. Well said.
What followed was a well-deserved 30-13, four tries to one victory, which gave STAC the Barbarians Trophy and allowed it to retain the Moascar Cup. Wing and player of the match Harry Murray led the way with a brace from his pace, while the scrum was dominant. In the midfield, centre Raymond Nu’u came up with some stinging tackles. Layton Francis scored from a well-executed lineout drive.

Cambridge simply missed too many tackles, 18 alone by the break, but did score a fine try to centre Reirei Tupaea, while No 10 Spencer Jones kicked well.
At fulltime, the STAC players were so exhausted they could hardly raise their arms in triumph.

After the epic 2014 boys’ final, one could hardly have hoped for a similar decider in 2015, but Rotorua and Scots provided it, the 36-27 drama played out until the 70th and final minute.
There was a swirling wind. Scots sprung the first surprise by having prop Alex Fidow pack down at No 8. He was again a constant handful, his well-honed skillset belying his huge 143kg frame.

Rotorua opened the scoring through halfback Te Ra Whata, who took a long inside ball from wing Ngarohi McGarvey-Black. Scots’ go-to lineout man was lock Henry Mexted, but the Rotorua pack was making some strong carries, and the slick footwork of Te Aute at the back was causing concern. However, he was slipped by his opposite Jack Gray for Scots’ opening try.

Rotorua’s reply was swift and deadly, wing James Tofa over after assists by Te Aute and McGarvey-Black. Tofa looked to be over again soon afterwards but was pinged for a double movement.
At 27 minutes, I made note of what happened next. Te Aute scored one of the finest solo tries of 2015 at any level of rugby. He beat five defenders on a 60m exhibition of pace, acceleration and guile. One can see why All Blacks Sevens coach Sir Gordon Tietjens likes the cut of this kid’s gib.

Scots stormed back, Fidow scoring before the break in a show of power and agility to bring it to 19-12 Rotorua. As is so often the case, the Umaga-Jensens broke the game open, Peter scoring from Thomas’ bust in an 80m thriller.

Rotorua hit back through Tofa’s second, from a heads-up play by the pack, and another sparking effort by Te Aute.

Fidow’s second try off another long build-up featuring the Umaga-Jensens saw Rotorua hold a 29-27 lead into the final 10 minutes of high drama. There was a red card, and a yellow card against Rotorua, but Scots could not make their advantage count. Then came a crowd invasion before Kaydis Hona sealed it in the last minute with a try.

Rotorua had won its fourth national title and with it the Barbarians Cup. Te Aute was, rightly, adjudged Top 4 player of the year

“On behalf of the Barbarians club, I just want to say how proud we are to be involved with this tournament,” said President Bryan Williams. “To be able to support the future stars of the game is something we are very pleased to do. What a fantastic final. I congratulate both teams Rotorua will be going to the Sanix tournament (in Japan) next year.” 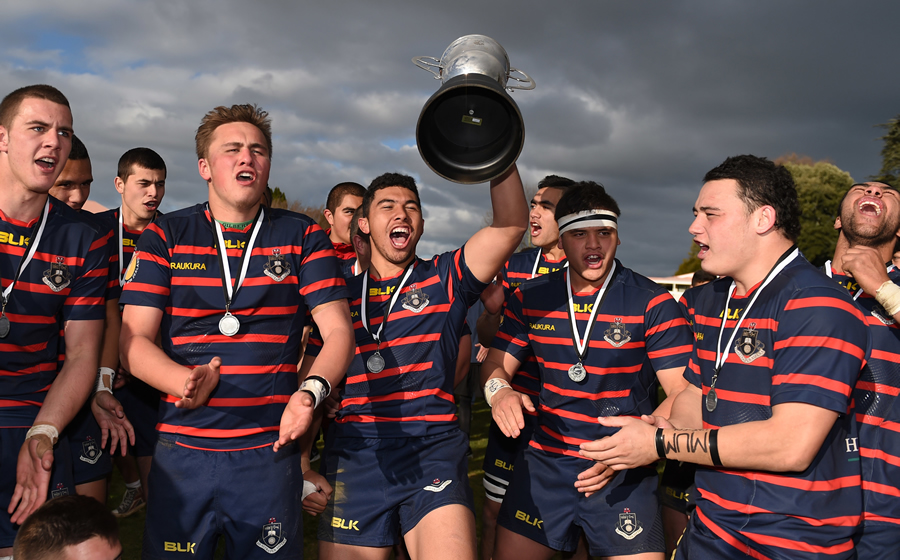